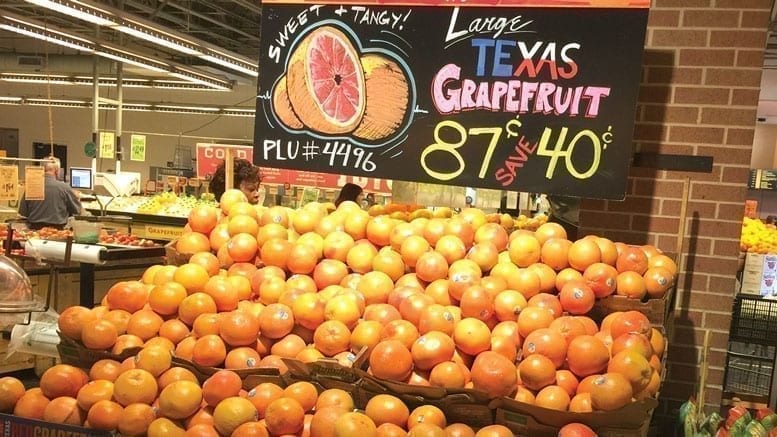 The Lone Star State is a major fruit and vegetable garden during the winter months.

Every year starting in late October or early November and going until April or May, J&D Produce harvests an incredible variety of vegetable crops from rich ground in the Rio Grande Valley near Edinburg, TX.

The winter harvest includes everything from melons to arugula, eight varieties of field-grown peppers and three colors of greenhouse-grown peppers, Kohlrabi, greens including kale, spinach and frisee, and five varieties of cabbage, to name a few.

This bounty, marketed under the Little Bear Brand, could become even more varied in the future as J&D looks to expand on its role as a winter vegetable garden. “There are some different things we are trialing now,” says Jeff Brechler, sales and production representative at J & D Produce. “They are new to the mix for us, and we want to wait to see how they grow here.”

The Little Bear Brand comes with a distinctly Texan logo of a teddy bear wearing a cowboy hat, but most of the consumers of this winter produce from the Rio Grande Valley live on the Eastern seaboard.

“A large percentage of what we grow is sold outside of Texas, to the Northeast and Canada,” says Brechler. “The one thing that has increased is our organic production. Our organic acreage is probably up 15% to 20% over last year.”

J&D starts its winter season in early November, mostly with leafy greens and cabbage. Some Texas growers have become national leaders in the supply of particular produce items. “We grow about 85% of the onion transplants in the country,” says Bruce Frasier, owner of Dixondale Farms, Carrizo Springs, TX. “We go to all 50 states. This will be our 107th year.”

Started in 1913 when John McClendon moved his family from Pancake, TX to Dimmit County, Dixondale Farms’ role as a dominant supplier of onion transplants gives a unique view of subtle changes in how the nation sources produce.

“Overall demand is probably decreasing a little,” says Frasier. “We go to the farmers, and when their prices are low, they cut down on acreage or switch from transplants to direct seeding. We go to the garden centers, and when the economy is good, people go out to eat rather than growing a garden. Our sales to growers who go to the farmers markets have increased, because they’re selling to local restaurants.”

Texas agriculture is a national supplier but the produce also serves loyal consumers at the many supermarkets throughout the state. “There are many people who are partial to homegrown produce,” says Dan Legendre, supervisor in produce for Market Basket Food Stores, Nederland, TX, an independent chain, formed 57 years ago, with 34 stores serving Southeast Texas and Louisiana.

“Anytime we have an opportunity to promote produce from Texas farms we definitely take advantage of it,” says Legendre.

Bernie Thiel is able to keep his produce close to home because of the network of loyal Texas buyers he has developed over nearly five decades of vegetable farming outside Lubbock.

“Pretty much everything I grow stays in Texas,” says Thiel, farmer-owner of Sunburst Farms, Lubbock, TX. “The squash has been good. We go to United Supermarkets, Albertson’s, Safeway and HEB. I’ve been selling to them a long time; I’ve been growing for 48 years. We’ve got great customers, and they’ve treated us well. We have big population centers in Texas – Dallas, Ft. Worth, Houston, El Paso, San Antonio, Lubbock.”

Sunburst Farms produces 120 acres of squash sold through major retailers in Texas. It also has a few acres of mixed fruits and vegetables that Thiel sells to his neighbors at a popular farm stand on County Road 7140 outside Lubbock.

“The farm stand is doing well,” says Thiel. “The local people seem to really enjoy it, and some customers come in two or three times a week. It’s been a lot of fun, and we meet a lot of people. We have blueberries, green beans, okra, cantaloupe, watermelon, pumpkins, tomatoes, slicer and pickling cucumbers and about six or seven varieties of peppers. In the fall we’ll have turnip greens.”

Texas farmers are producing an ever more diverse list of crops serving markets both local and far away.

“Cattle and cotton may still well be king in Texas, but we do have some other major players in the produce crop areas. Currently, our major produce crops are watermelon, grapefruit, onions, cabbage, potatoes and pecans,” says Scott Sroufe, coordinator for marketing, trade and business development division of the Texas Department of Agriculture, Austin, TX.

“Citrus continues to be one of our largest crops. We currently have 28,000 acres total in citrus production in the state, with approximately 70% of that acreage in grapefruit production and 30% in orange production. Potato production, white and sweet potato combined, occupied just under 23,000 acres and watermelon more than 21,000 acres.”

The relative importance of different produce items within this mix shift from year to year as agriculture continues to evolve.

Through its Go Texan program, the Texas Department of Agriculture takes an active role in connecting the state’s diverse produce farmers with consumers looking to support them by enjoying fresh fruits and vegetables.

“There’s no denying Lone Star pride. Go Texan, with its signature mark in the shape of Texas, celebrates, promotes and supports the business savvy and plainspoken grit Texas agriculture is known for throughout the world,” according to the program’s website. “Whether it’s grown, sewn or served up on a plate, more than 26 million Texans shop, travel and dine out in support of Texas business and agriculture.”

The Go Texan ‘champion’ sponsors list includes major retailers like Aldi and H-E-B, a San Antonio-based regional giant and familiar site in the Lone Star State, with more than 350 stores in Texas and across the Rio Grande in northeast Mexico.

“We have retailers whose corporate offices are in other parts of the country, yet they have locations in Texas that want to be a part of Go Texan to ensure that they can relate to Texas consumers and proudly feature Go Texan products,” says Sroufe. “To other retailers outside the state, it shows that it is still a product of the USA. I know there are retailers that may choose to have a product from Texas to still provide something semi-local rather than one that has been imported from much further away.”

Like other regions growing labor-intensive crops in other states, such as California and Florida, many produce farmers in Texas sometimes find it difficult in the global economy to find workers, or to compete with operations paying far less.

“It seems like we have less produce coming out of Texas than we used to,” says Thiel of Sunburst Farms. “You used to see a packing shed in every small town, and you don’t see that any more. To survive in agriculture you’ve got to be in the H2A program. Wages here are also too high to compete.”

Vegetable growers have held their own by branching out into new crops, because despite the flood of imports from Mexico, Texas still produced 85,000 acres of fresh market vegetables in the most recent 2017 Census of Agriculture.

“Mexico has not impacted me,” says Thiel. “My expectation is this year there is not quite as much squash from Mexico as there was last year.”

But global production shifts did impact the fruit harvest as the state’s citrus acreage declined around 10% over the past decade. There was a similar drop in the amount of land devoted to fresh market fruits of other varieties.

Mexico has become, by far, the largest source of fruits and vegetables imported into this country.

U.S. imports of fruits and vegetables from Mexico increased from $4.3 billion in 2005 to $10.4 billion a decade later, with tomatoes, avocados, peppers, grapes, cucumbers, melons, berries and onions leading the way.

“In particular, U.S. imports of tomatoes and fresh peppers from Mexico have risen sharply,” says Renée Johnson, U.S. Department of Agriculture specialist in agricultural policy in her 2016 study, The U.S. Trade Situation for Fruit and Vegetable Products.

For many grower-shippers the border between Texas and Mexico has become largely irrelevant.

“We sell all across the states, and it changes with the time of year. Texas is one of our strongest states. We sell Roma and organic Roma tomatoes, grape tomatoes, organic grape tomatoes, and vine ripes,” says Jaime Garcia, general manager of Kingdom Fresh, Donna, TX. But then he adds, “We only grow them in Mexico.”

Unlike major counter-seasonal suppliers like Chile, Mexico has developed a large and diverse produce sector that serves consumers on both sides of the border.

“Eighty-two percent of Mexico’s horticultural production is consumed by its own large and growing market of 86 million inhabitants,” wrote University of California, Davis agricultural economist Roberta Cook in her 2016 presentation The Evolving Bilateral U.S.-Mexico Horticultural Trading Relationship: Trends and Issues. “Hence, Mexico is quite different from Holland, Chile, New Zealand or South Africa, all of which have export-driven horticultural sectors.”

Nothing illustrates the development of close relations between shippers on both sides of the border like the evolution of the Texas International Produce Association, which has its roots in the original Texas Produce Association, created in 1942 by a group of industry leaders who shared a vision to expand the Texas produce industry.

After decades of working to represent the business, economic and political interests of Texas-grown fruits and vegetables in 2012, in response to the rapidly evolving needs of its members, the group expanded its mission to also address the issues and opportunities surrounding the importation and marketing of foreign-grown produce that was being shipped through Texas ports.

The diversity of the affiliations of the board members of this association reflects the bi-national flavor that is Texas produce.

Board member Jimmy Garza is from Bebo Distributing, a family operation that began with 10 acres of greenhouses on the banks of the Rio Grande and grew to become a shipper of fruits and vegetables from all the major growing regions in both Texas and Mexico throughout North America.

Grow Farms Texas, which is represented by director of sales Tommy Wilkins, ships vegetables from Kentucky, Indiana, Ohio and Tennessee, as well as Texas.

Jed Murray is general manager of Tenaza Organics, which started with a quarter acre of artichokes in the Rio Grande Valley and has grown to 180 acres of 20 different organic crops proudly merchandised with the Go Texan logo.