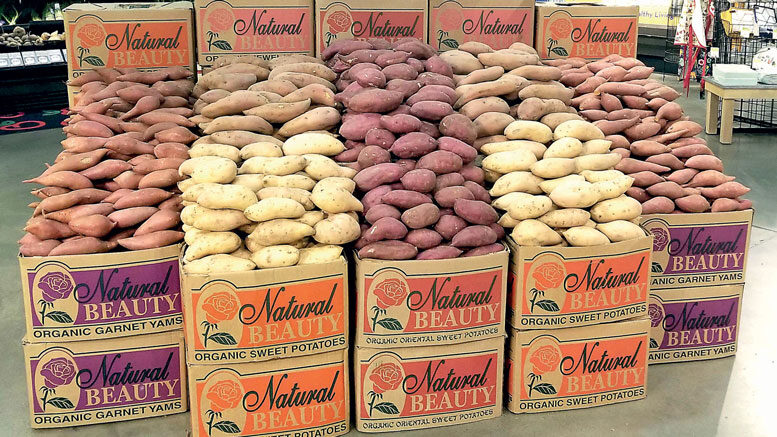 Sweet potatoes are as sweet in August as in the Thanksgiving casserole.

Actors who long performed famous roles like Gilligan or Gomer or Frank Burns, found firm, slotted stage identities are difficult to overcome. Such is the position of sweet potatoes: Americans love them for Thanksgiving, Christmas and Easter feasts.

But a three-year consumer research project, concluded in 2021 by the U.S. Sweet Potato Council, based in Dillsburg, PA, advised the nation’s sweet potato producers to enhance marketing plans with consumer education.

Kay Rentzel, executive director of the sweet potato group, says the USDA-funded survey shows a need to encourage year-round, rather than seasonal, consumption. Through research focused on consumer perceptions of sweet potatoes, “we learned we need to educate consumers.”

Rentzel adds, beyond seasonality, the category now has many sweet potato varieties, with white, purple, orange and different options with assorted flavors and textures. She notes these new sweet potato varieties are mostly produced by California growers, who work in a much different climate and conditions than southeastern United States producers.

“There is a lot of education to be done. We’ve just touched the tip of the iceberg on that.”

Specifically, Simon notes: “In the summer, you can slice them a half-inch thick and grill them until they’re soft. Put on some olive oil and rosemary, or other fresh herbs, with some salt and pepper. Serve with grilled zucchini or corn. It’s great on the summer grill. It’s easy and flavorful, with a nice color.”

CoCo Daughtry, communications specialist for the North Carolina SweetPotato Commission, based in Benson, NC, agrees sweetpotatoes are easy to grill — “a perfect food for summer.”

“While we are very happy that people think of sweetpotatoes for their holiday meal planning during cold winter months, many consumers have already realized that sweet potatoes are nutritious and full of antioxidants — it is the ultimate superfood that can be enjoyed any time of year, even every day,” Daughtry says. “They can be made into smoothies, grilled items such as sides, fries, and even as part of salads and, of course, desserts.

Consumers are starting to make sweet potatoes part of their year-round meal planning.

“Thanks to their rich nutritional value and ease of use in a variety of dishes and preparation applications, consumers are starting to make sweetpotatoes part of their year-round meal planning,” she adds. “We are starting to see them in breakfast dishes, salads, protein bowls, tacos, and more. Even as a ‘stretch’ filler for plant-based dishes.”

“Our summer promotion is meant to help consumers discover new and surprising ways to cook sweetpotatoes, including on the griddle and the grill,” Daughtry says.

As to North Carolina marketing for later this year, Daughtry says they haven’t unveiled other seasonal promotions, but “they promote the fact that almost 70% of the sweetpotatoes that the nation eats come from North Carolina, and that they are nutritious and versatile and lend themselves to a plethora of dishes — year-round.”

Louisiana’s Simon says “sweet potatoes are typically merchandised at the back of a produce department. Consumers have to go dig for them. I encourage retailers to lift them from the bottom bins to eye level. And, of course, move them to the front of the department.”

Rentzel, from the U.S. Sweet Potato group, similarly suggests retail merchandisers don’t “bury them in the corner of the department. Enhance the sales, because it’s an impulse purchase, that’s usually not on the shopping list.”

“Sweet potatoes on a shelf are not inherently eye-catching, because it’s not a bright item.” But Rentzel stresses they “have a warm, welcoming earth tone, which looks even better if the product is well-lit.”

When the topic is first-broached, Rentzel claims not to be an expert on sweet potato merchandising. At the U.S. Sweet Potato Council, “a lot of we do is public information, policy based. We leave promotion to various states because everyone wants proprietary promotions for the company or state brand.”

But when nudged, Rentzel is an encyclopedia for sweet potato merchandising philosophy and display ideas. In fact, her council’s website has plentiful recipe ideas. “We encourage different types of sweet potato utilizations. It’s a versatile, healthy food.”

At retail, “sweet potatoes typically have been an impulse item,” she reiterates. “This is great for Easter, Thanksgiving and Christmas, but they’re also great in summertime smoothies, salads and the emergence of ‘power bowls.’”

She encourages retailers to cross-merchandise in the store. “Every time consumers receive a cross-merchandising idea, the retailer has the opportunity to sell at least two items, adding profits and sales to the store.”

Simon says Louisiana Sweet Potato Association growers, who produce 7,000 acres of sweet potatoes, mostly market in the Southeast. Of course, some of the product is shipped up the East Coast. But interestingly, Mexico is a growing market, too.

“We’ve put some energy into developing the Mexican market.”

Louisiana’s new crop of sweet potatoes will begin harvest in the last week or two of August. “Everything so far is off to a good start.”

Sweet potato diversity can shift into the processed food category. One such supplier is Sweetpotato Awesome, which is based in Las Vegas, NV. Joshua Kingdon is the company’s founder and chief operating officer.

“We are a snack food product. We list a two-year shelf life, and the product is available year-round.”

Kingdon says the sweet potato category is growing and he expects Sweetpotato Awesome, which was founded in 2016, to expand. He explains his freeze-dried, shelf-stable production brings high nutrients, which are appreciated by consumers.